I’m still studying the Portuguese language (more on that in a future post) but I know that part of learning about a culture includes exploring the cuisine. And, as a self-proclaimed foodie, I find that immersing myself into the culinary aspects of a culture does wonders for my overall excitement. So, I tried my hand at preparing a traditional Portuguese dish. Here’s my story about it.

I looked through various online sources to find out what makes up the bulk of the typical Portuguese diet. What I found was a lot of seafood and vegetable dishes, and a wide array of pastries. Fortunately, I love ALL of these, so I was excited. I wanted to start with something simple, so I decided to try making caldo verde, a traditional Portuguese soup that gets its signature green color from its sole green ingredient, kale.

Only one problem with caldo verde – it normally contains chourico (chorizo), a type of pork sausage. I don’t eat any pork, so I had to adjust the recipe. I tried making it twice, and both times turned out well, though my second attempt (using a combinations of Trader Joe’s soy chorizo and Field Roast Italian Sausage, though next time I’ll replace the Italian sausage with Field Roast Mexican Chipotle Sausage) was more of a success. 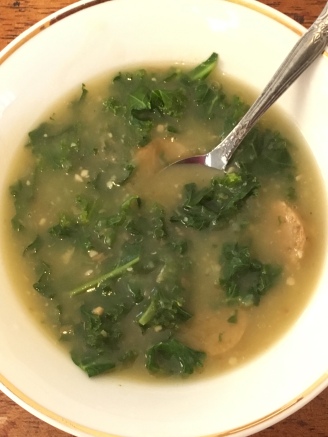 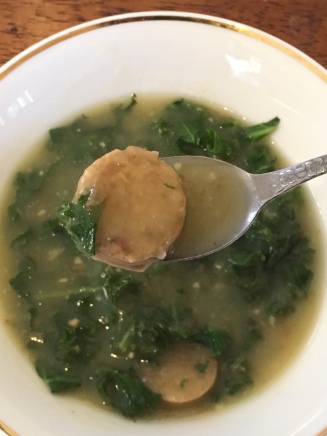 I also used a blender, as opposed to mashing the potatoes by hand. It’s much easier for me to get the consistency I desire by using the blender. It also made the food prep portion easier – I could chop the potatoes and onions coarsely because the blender would take care of the rest of the work for me.

The soup is luscious, filling and very easy to make. It’s also pretty inexpensive: it contains a lot of common ingredients and can easily be tweaked for your taste. I’m going to share my recipe below, as well as the recipes I reviewed while coming up with my own version of caldo verde. 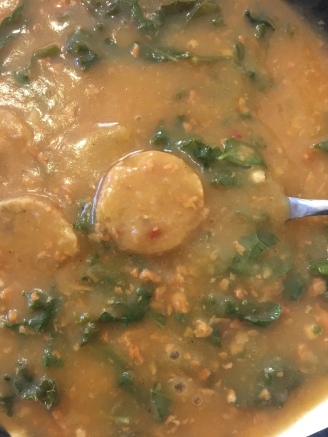 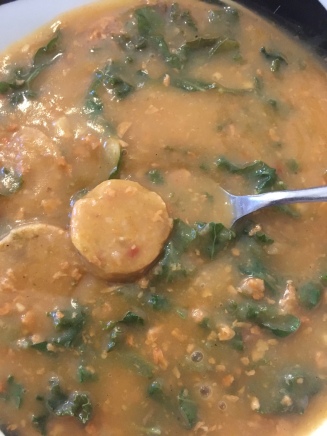 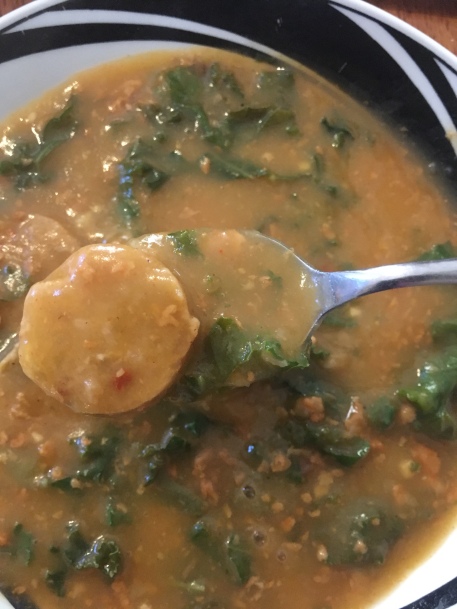 Close up of the finished product, second time around

I used AllRecipes, Olivia’s Cuisine and Leite’s Culinaria to create my recipe. Many thanks to them for such clear directions! I couldn’t have done it without their recipes as templates. Muito obrigada! 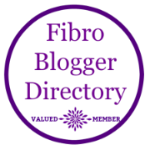