If you all didn’t know, I love to dine out. I actually think I like eating out a bit too much, which is why I’ve cut down significantly over the past few months. That being said, I still got excited at the dining options available on my latest cruise.

The Allure of the Seas (a Royal Caribbean ship) has multiple restaurants on board, as well as several cafes, wine bars, and snack bars. My family and I dined regularly at the main dining room at American Icon Grille. This restaurant  published a luxe menu every evening, featuring various appetizers, entrees and desserts. The restaurant changed up the menus every day, so there was always something new to try. There are also a few other themed restaurants, such as Silk (Asian foods) and The Grande (American foods).

A typical breakfast that I’d order from room service

There is also a buffet located near the pools (the Windjammer Cafe), which has a few of the food items featured in American Icon Grille but also other dishes that aren’t available in any of the dining rooms. To be honest, I had the best time dining at the Windjammer in the evenings. The buffet had a different chilled fruit soup every night which were delicious and I could literally eat every day without getting tired of them (think the world’s smoothiest, most delicious smoothies . . . yes, it was as tasty as it sounds).

A menu from one evening at American Icon Grille

Oooh, not to mention, there is a Sorrento’s pizza, which makes fresh pizza until 3 AM. Who doesn’t love pizza? And the room service has lots of delicious fresh options available all day long.

I won’t continue to talk about the foods: let’s see some pictures, shall we? 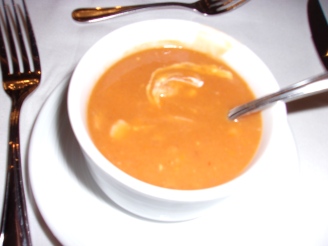 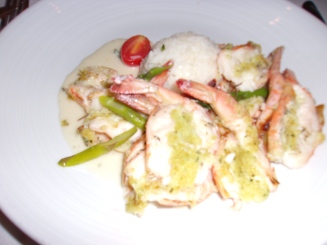 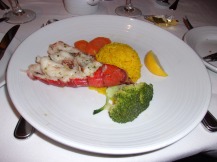 Enjoy your Friday, and I’ll talk to you all tomorrow!

Happy Thursday, beloveds! I’m enjoying my first full day in Raleigh, NC and, if all goes well, I’ll have a special treat for you all in the next few days. I thought I’d share with you all some of the basic things I consider when planning my travel. I hope it helps you to plan your perfect trip!

Whenever I plan a trip, I try to include as many of these things as possible. For me, these things comprise an ideal trip: shopping, dining, sightseeing, books, and some time in nature. Every now and then, I can incorporate two or more of these things in one outing (for instance, a visit to a park in the downtown area that’s located a block or two away from the “local favorite” restaurant).

One item that I didn’t list on this sample itinerary that I *hope* you all will include is REST. I can’t begin to describe how hard it is to do all of the fun stuff you’ve planned when you’re exhausted. So make sure that SLEEP is part of your plans, as well!

That’s it for my mini-itinerary. Enjoy your Friday, and I’ll talk to you all tomorrow!

Happy Thursday friends! I’m coming to you all with a (mini) gripe. I don’t usually complain on this blog: after all, I believe that life is wonderful and good things are all around us. As a rule, I don’t complain.

However, I have my limits. And, because I have my limits, I feel that it’s time to put my foot down and turn over a new leaf. As we go into this next blogging year, I felt it was important to tell you all the change that I’m making.

You’ve read the title, so you have a clue what I’m talking about. As you all may know, I love food. Like, I really love it. I’m a huge fan of international cuisine, such as Thai, Indian, Kenyan, Jamaican, Ethiopian and (authentic) Chinese. As a result, I tended to order a lot of takeout and I enjoyed – for a time – having food delivered to me. 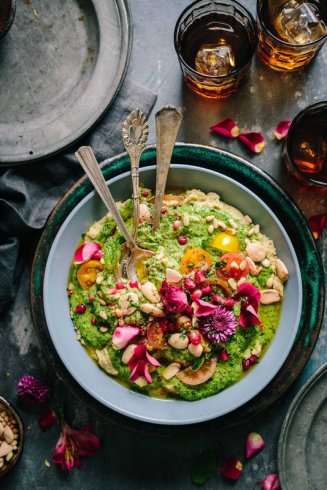 Unfortunately, I’ve had a string of poor experiences over the past few months. Missing items, incorrect orders, food not being spiced/seasoned to the level requested … It was clear that something had to change because the quality of delivery orders that I received has steadily declined.

So, I’ve decided to quit ordering delivery and start making more dishes at home. I only have a surface-level knowledge of foreign cuisine, so it’ll be fun to learn more about how to prepare dishes from around the world. I’ll be blogging about these recipes and sharing my tips, tricks, and (yes) even my fails! I hope that you all stick around for the journey.

I’ll still be dining out and reviewing different restaurants, but as far as delivery goes? There will be a moratorium on that for an indefinite period. It’ll be more fun to learn how to cook and to share what I learn with you all. We’ll have fun together – I promise!

Happy Friday, friends! Today is a first for me: it’s a West African food review!

I have never been a fan of the West African dishes that I’ve tried. I’ve had egusi, fufu and jollof rice, but I just wasn’t wowed. However, I really wanted to try something different. So I decided to give West African food another try.

I order from Le Mandigue in Philadelphia. As an aspiring vegetarian (that fails frequently!), I wanted to opt for a meatless entrée. So I got the vegetarian fried rice and steamed vegetables. I also got degue, monie callama and kallah, which I didn’t realize at the time were all desserts.

Here are some photos of the meal:

I ordered through UberEats and my food arrived quickly.

The fried rice was tasty and substantial. The steamed vegetables were well-seasoned and weren’t overpowering at all.

And the desserts! I How did I not already know about these amazing deserts?! These were the most interesting part of the meal. Dege reminds me of the rice pudding or tapioca pudding available at some Indian restaurants: creamy, sweet with a hint of sourness (probably because it’s made with sour milk). It’s the mix of flavors that make this such a multidimensional dessert. Monie callama is like a liquified jelly, yummy and smooth, with tapioca-like starch suspended within. Just yum!

I wish I could have enjoyed this in the restaurant but alas, I ordered it to my room. However, I will be sure to visit the restaurant in person when I return to Philadelphia. I’m so looking forward to it!

Last week, I returned to a restaurant that I’ve visited but never reviewed. Anokha is a small but charming restaurant located in the Short Pump area of Richmond, Virginia. The restaurant specializes in Indian cuisine with an upscale twist.

As an ethnic (international) food fanatic, I find myself constantly on the hunt for new restaurants to get my “fix”. While I tried Anokha one day during my lunch break, I was eager to try it again to make sure that it was as good as I recall.

I’m pleased to say that my memory didn’t fail me: Anokha’s food is outstanding and worth the visit.

I tried the Shrimp Koliwada as my appetizer, the Crabmeat Curry as my entree, and the regular and peshwari naan. Here are the photos of my Indian feast! 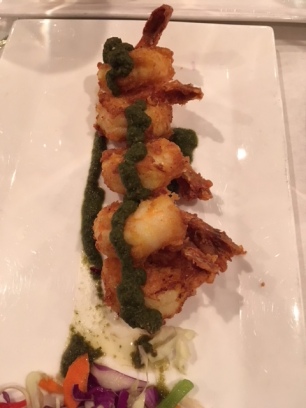 Shrimp Koliwada (I was starving, I had to eat one before I took the pic!)

Crabmeat Curry (you can even see my cousin’s hand in this photo: for once, I wasn’t dining alone! And she ordered the crabmeat curry, too) 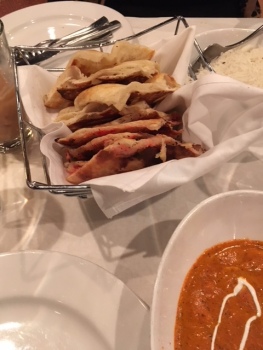 Naan (regular and peshwari: the peshwari naan has the reddish hues)

The restaurants describes the shrimp koliwada as, “Jumbo Shrimp in a Konkan Style Spiced Batter”. The end result was crisp in the best possible way, and the chutney was a nice, spicy garnish for the dish. The fresh slaw was a delicious flavor counterpoint for the tasty fried shrimp. 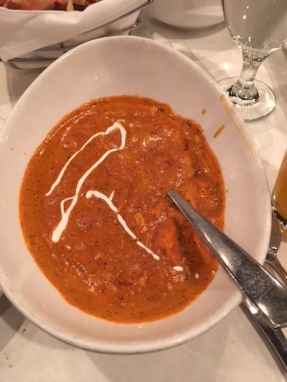 Closer pic of the crabmeat curry

The crabmeat curry was everything a good curry should be: hearty, creamy, spicy, but full of fresh ingredients and flavors. The portion was so generous: I had enough for lunch on the next day. The restaurant really impressed me with the crabmeat in this dish: they used real lump crabmeat, and lots of it. This was well worth the price.

The naan was freshly toasted and buttery. The only drawback was that the peshwari naan didn’t have as much coconut and dried fruit as I expected. However, I like the more sparse fruit/coconut: it makes it a more suitable as a dipping bread for the main entree (I usually save my peshwari naan for dessert).

As the seasons change, I find myself reaching for more comfort: less light and airy experiences, more warm, full-bodied pleasures. This desire for comfort comes in all forms, from clothing I wear, to conversations with friends, to foods I choose to eat.

It occurred to me that I was reaching my “comfort” period when I stumbled across a bag of frozen peas and decided to whip up a batch of pea soup. I love how light yet filling this soup is: it really is a perfect meal for the fall. I ate it with garlic knots and a small glass of white wine on the side. To me, the lightness of peas – a summer vegetable – contrasts well with the heartier feel of this soup. Some people add mint to their version but I choose to omit mint: that herb feels very “summery” to me, and that wasn’t the feel I was going for. 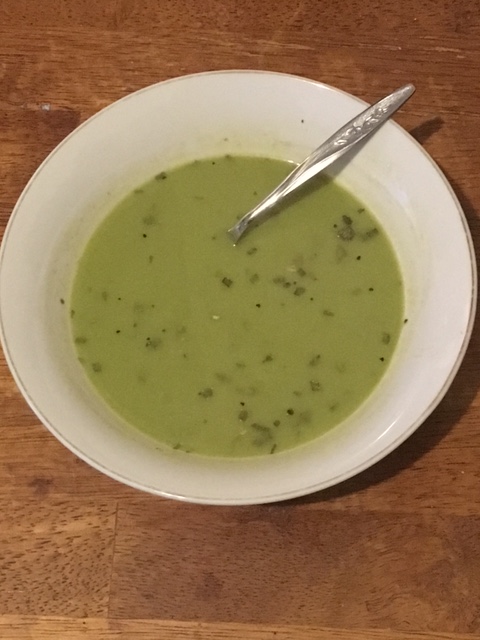 I don’t frequently post recipes, but I think this one is worth the share. I hope you enjoy it as much as I did.

Melt vegetable spread in a medium pot, then add leek tops and onions. Saute for five minutes until translucent and fragrant. Add vegetable broth and water, and bring to a boil. Add bag of peas, and cook for 3 to 5 minutes. Turn off heat and allow soup to cool for at least 15 – 20 minutes.

Pour cooked peas and broth into a blender, and blend on low until smooth. If the soup has cooled down too much, return to pot and reheat over low heat. Pour soup into serving bowls and sprinkle black pepper, salt and dried chives onto each serving. If desired, put a dollop of vegan sour cream on top of each bowl.