Happy Monday, friends! Of all of the Asian Art Week auctions being held during the first half of September, no single auction house has as many events as Christie’s. Christie’s is having eight events – far more than I could comfortably put in one post. I will be breaking my top picks into two different posts, as there is no way that I can adequately discuss all of the events without separating them a bit.

Christie’s kicks of Asian Art Week with one auction on September 11 and three on September 12th. The first auction is Fine Chinese paintings, with pieces created during multiple dynasties and previously held in prestigious private collections. This one has 132 lots: a substantial amount for an auction that leads a week of activity. My favorite piece from this collection is Traveling in Autumn by Li Xiongcai (1910 – 2001). Whenever I think of autumn, I think of vividly colored trees and a tinge of warmth in the landscape. However, Xiongcai’s work evokes the feeling of late fall: cooler temperatures, barer tree, and only glimmers of the copper-hued leaves that were in place just weeks prior. This more somber depiction of autumn is unique and refreshing, and, since it could easily sell for over $15,000, it’ll probably be a popular painting among the bidders.

After a full night’s rest, bidders can get ready for some whirlwind activity on September 12, when Christies will be hosting three Asian art auctions. The first auction – South Asian Modern + Contemporary Art – starts at 10 AM, and it sure to bring out some unique buyers. With a little less than 100 items up for auction, this sale may be brief but it will no doubt also be impactful, as the items being auctioned reflect a typically underrepresented group of artists and artisans. My favorite piece from this collection is Untitled (Street Scene) by Syed Haider Raza (1922-2016). While Raza was born in India, he spent most of his adulthood in Paris. I saw shades of Post-Impressionism when I looked at the setting and brushstrokes features in this painting. This painting could easily sell for $35,000 or more.

If contemporary art isn’t your cup of tea, bidders can check out The Ruth and Carl Barron Collection of Fine Chinese Snuff Bottles: Part VI. I’m not a huge fans of snuff bottles but I can appreciate the artistry of them. My favorite is the Molded and Carved Biscuit Snuff Bottle featuring an elaborate dragon carving on the exterior. The dragon is depicted as it catches a flaming pearl in its mouth, and its body and tail are set against a carved background of clouds and fire. It’s quite an eyecatching piece, and is estimated to be auctioned somewhere between $8,000 and $10,000.

Finally, the auction activities on September 12th end with the Indian, Himalayan and Southeast Asian Works of Art sale starting at 2 PM. The lot that made me swoon was the Gilt and Polychrome Wood Book Cover. I love any and all things book related, so it should be no surprise that this book cover was my favorite item of this auction. The fact that it came from Tibet – a country that isn’t featured as much in the popular auctions – made me love it even more. This 800 year old treasure will be the crown jewel of someone’s Asian art collection – I can feel it! 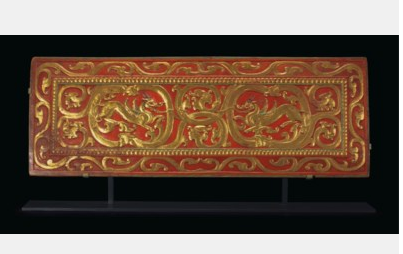 That’s it for the first half of my Christie’s art auction picks. Look out for Part 2 coming soon!