People’s Bao food truck has been on my “to try” list for a few months now. I’ve craved delicious Chinese style buns since my trip to China last year. I was blown away by the flavor of Momofuku’s mushroom buns (which I reviewed here). But I saw the rave reviews of People’s Bao on Yelp and I was eager to give it a whirl.

The truck finally arrived close to my building, and I seized the opportunity. I ordered the Portabella buns and Portabella rice bowl. I wasn’t sure what to expect, but I figured that if the food was half as good as Momofuku, I would fare well.

Here’s the good, bad and otherwise:

The Portabella mushrooms were ample but not particularly flavorful. They would have benefited from marinating in a sauce that would infuse the mushrooms with flavor. Also, since these mushrooms are thicker than the shiitake ones used by Momofuku, they didn’t cook to the bacon-like crispiness of the last buns I tried.

The sauce added to the bun was spicy enough but fairly indescribable. I can’t name anything that it tasted like, other than “spice”. Also, this was another bun creation where the filling  was folded in the bun like a sandwich, instead of being fully encased in the bun bread (like the buns served during dim sum).

As far as the rice bowl? Meh. Lots of delicious, fresh veggies but, again, not a lot of flavor. I tried to like it, but I couldn’t. I eat primarily vegetarian meals but I still love flavor, and this dish came up lacking.

The best part of the meal was the watermelon garnish that I found in the bottom of my bag! I initially thought the ramekins contained a sauce to add to my entrees, and I was excited at the thought of something savory being in the bag. But, as it turns out, the ramekins contained small chunks of sweet, ripe watermelon instead. That was an unexpected treat, and a nice accent to an otherwise forgettable meal.

I’m adding some stock photos for context, but I didn’t photograph this meal, because it simply wasn’t worth it. 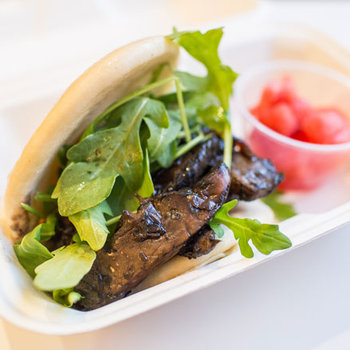 This photo from DCist looks exactly like the bun that I received.

In a nutshell? I wouldn’t order again. It’s possible that this was just an “off” day, but I’d rather pay a few more dollars and have guaranteed tastiness at Momofuku. Maybe one day I’ll be adventurous enough to give it another go, but for now, I have to decline returning to People’s Bao.