“We are each other’s magnitude and bond” – Gwendolyn Brooks

On this 18th anniversary of her passing, I wanted to share some quotes from Gwendolyn Brooks, a poet and author that I learned about as a child but had somewhat forgotten as an adult.

It’s not that I don’t recall the words to “We Real Cool” by heart (because I do). But as with many things, we get exposed to new art, new poetry, new thoughts . . . And that which we knew as children tends to fade a bit. While thinking about some of the people I wanted to feature in the “Words of Wisdom” series, Brooks popped into my mind. I remember being a young girl and seeing the announcement of her passing in a magazine that I was reading. She lived a long and full life, and we are fortunate that she decided to share her talents with us. 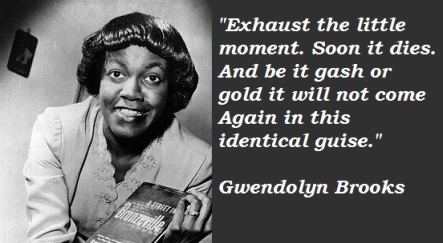 She was the first African American to be awarded a Pulitzer Prize. She captured life in Chicago during the post-Depression era, and her writing straddled the fine line of writing honestly while preserving the dignity of her subjects. She was also Illinois’s Poet Laureate in 1968 and a Poet Laureate Consultant in Poetry for the Library of Congress.

Brooks led a particularly quiet life: she was a wife and mother. She lived in Chicago all of her life, and found her inspiration among the neighborhoods where she grew up and raised her own children.

In memory of Gwendolyn Brooks: thank you for your work.

(Photos courtesy of majeherself, AZQuotes, wordsonimages, and Rhapsody in Books)